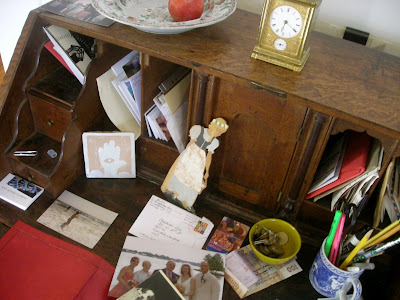 I was really moved by Mrs. Nesbitt's own post for ABC Wednesday where she talked about her Dad.
So for today I thought I would feature my desk which was not at all photo-ready.
In my desk you will find, daughter and dogs and dihrams (Moroccan money.) 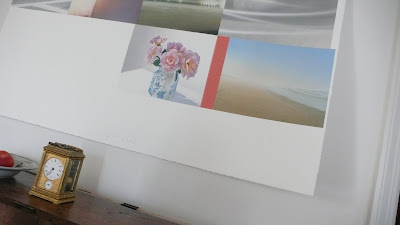 On top of the desk sits my grandmother's French traveling clock which still works and pings merrily but does not record the actual time but whatever time it wishes. It stops and starts almost randomly and is very friendly. Behind the desk is R's most recent painting which contains flowers which is good since there aren't any flowers on the desk right now. 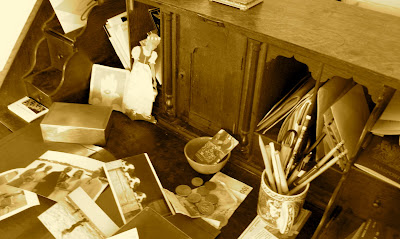 The last picture is in sepia which always seems to indicate history and nostalgia and all that sort of thing.
A history of my desk. It was made circa 1790 and is English country oak. It was bought in 1937 for 25 pounds sterling and given to my mother as a wedding present from her best friend's family.
I often wonder about who it must have belonged to through the Napoleonic wars and the Boer War and the First World War.
But I know it was from this desk that my mother wrote letters to my father during the Second.
I have known this desk all my life. It used to have a nice big blotter in the days people used proper ink.
The desk survived the journey to the US in 1990.
Now it is a repositary for all sorts of important stuff, and reminds me very much of my mother.
Posted by Elizabeth at 8:06 AM