First of all so many thanks to all the super kind commenters and others who have sent us their good wishes. We are fine --powerless, waterless and heatless ( am at a friend's house uptown writing this!) . Heartbreaking  pictures on the TV or horribly widespread destruction. Awful, awful and horribly sad. We were totally fortunate.
Herewith some random thoughts jotted down over the last two days:
So at about 8:30 on Tuesday evening the lights flickered and then went out.
No more TV, internet, video games.

No water, flushing the toilet, washing of hands (though we do have enough water to drink if we are careful.) Refrigerator.
Walked dog about 9:30 --only 4 floors of leg improving stair climbing.

Then realised that the votive candle lights aren’t bright enough to read by --unless I use lots of them, which I won’t -- since candles are impossible to come by.
Went to bed and listened to stormy gusts.

Got up at six in the dark and took the dog out. Frank, the doorman, asked if I was scared and I said, “What of?” But he stood by the door and kept an eye on me.
Yvette, our other door person, was a blanketed bundle sleeping in the lobby since she’s frightened of ‘mousies’ in the basement.
Went back to bed.
Claudia vibered from London about 8. Were we OK? Fine, I said.
Did we know Con Ed blew up? That the subways were flooded? Er.......no.
Did we have food? Apples and cheese and Robert’s homemade soup and all the Halloween candy for the Halloween that may not happen. (I made a good start on the Whoppers yesterday). And some cereal....
We do have gas so I can make tea without which I would be sad indeed. Went for another walk and met friends from 11th Avenue who had five feet of water in their stairwell. Met various friends with dogs like John with Big Henry and Alexis and Bunty with Baxter. Apparently the dog run was completely underwater.

No electricity below 39th except in the Penn South Development which has its own generator. Luckily I have friends there and will break in later to charge computer and hope to see a little TV news.
Other people have much more dramatic photos than me. The front fell off a building on 8th and 14th St ( we are 8th and 23rd). Will go to look at that when I take Buster out at lunch time. The stairs are treacherous without light.
Storm itself completely over.

Went to Nancy’s in Penn South with Buster in the afternoon. She has electricity and water but no phone or TV. I washed my hands in warm water. Waved to our building, where Robert was looking out of the window, from Nancy’s terrace, but he did not see me......not even 24 hours yet. Hm.....
Robert has gone out to try to buy water. Lots of people wandering round aimlessly. No traffic lights.
Groundsman at Penn South was washing down sidewalk with a hose.

Penn South has a community room where you can charge your cell phone but Buster was with me. No dogs allowed. 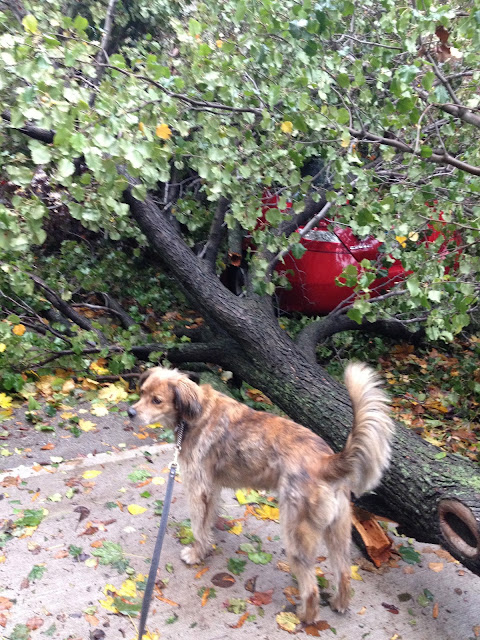 A candlelit dinner: tortelloni with unfrozen peas and good parmesan. Sort of getting used to the weirdness. Nancy gave us a nice big pillar candle --maybe I can see enough to continue knitting hat I started this morning.
Planning to go uptown tomorrow to shower and recharge computer so I can write, but have revived ink pen for calligraphy. 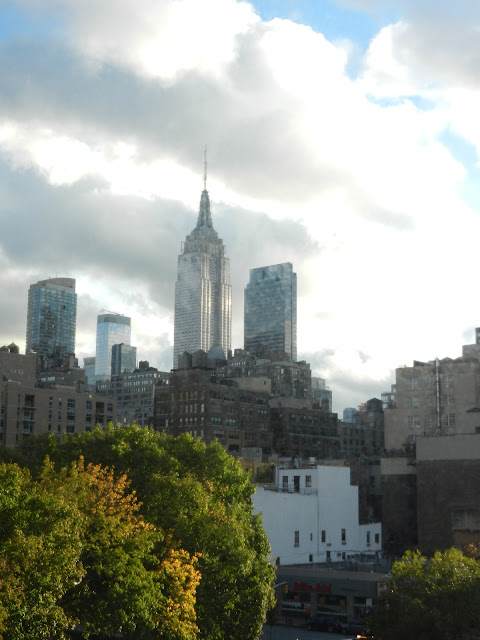 This morning it's brighter for us. 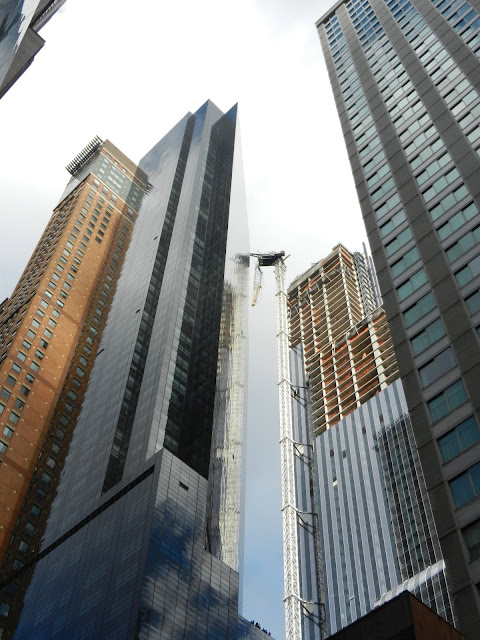 The hanging crane of 57th St.